2014-9-13 in Berlin, `Sayonara Nukes Berlin’ had a discussion meeting, entitled: Let’s talk about the nuclear decommissioning. We would like to report the summary of the discussion. Part one of this article outlines why we had this discussion. 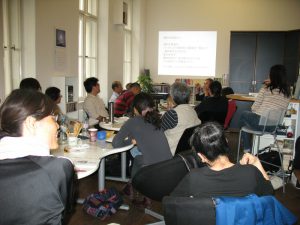 This blog article is a summary of my understanding of the discussion.

Fukumoto is a free journalist. He lived in East Germany (Deutsche Demokratische Republik) in the mid 80s. There was the Chernobyl nuclear incident. For him, that was an on-going disaster experience and that was the clue to follow the nuclear energy problems. He is the author of a book [Fukumoto 1] dealing with the radioactive contamination problem of Chernobyl. He is also one of the creators of a TV documentary about nuclear decommissioning [Fukumoto 2].

1.2 What is nuclear decommissioning?

1.2.2 The start and the end of a nuclear decommissioning

In Germany today, the government cannot give permission to build a reactor if the designer of the reactor didn’t consider the concept of nuclear decommissioning (East Germany (Deutsche Demokratische Republik) might not have had this regulation.) However, including the decommissioning concept in the reactor design seems not necessary to build a reactor in Japan (Recorder’s footnote: [NHK special document 2009.10.11] shows that a Japanese company lost some of the design plan of their reactor, and the remaining design plan is too old to read it. The regulations didn’t require to keep the plans.)

1.3 The methods of nuclear decommissioning

There are mainly two methods of nuclear decommissioning:

Let’s see them one by one.

This method starts decomposing the reactor directory after the power plant shuts down. The pros and cons of this method are:

Nuclear reactors are not standardized. Each plant is highly customized. Therefore, availability of the workers who know the plant is an advantage to operate the decommission.

On the other hand, immediately after the shutdown of the reactor, the radioactive dosage is still high. This makes the decommissioning operation difficult. We need to develop some kind of technology, for instance, using a special robot.

This method first keeps the reactor in storage and waits for some period (it is usually more than 30 years). The pros and cons of this method are:

On the other hand, this method needs more than thirty to fifty years of storage time, we usually cannot expect the help from the workers who know the plant details.

Everything on the earth has a limited lifetime. A nuclear reactor is not an exception. However, I haven’t heard what happens when a reactor reaches the end of its design lifespan. I can easily imagine that we cannot trash it like a piece of paper.

In this article, we talk about what is a nuclear decommissioning and how could we do that. My main concern is actually “Is it really possible and how?”, “How much does it cost? Who pays that?”, and “What should we do about the nuclear waste?” The first question has been answered in this article: It might be possible, but it is difficult.

Before the Fukushima disaster, I was less concerned about the energy problem. I simply thought, “Anyone should have thought through it.” However, what we saw in the Fukushima disaster was “No one thought about it.” and “No one wants to take responsibility.” The responsible people told us, “it’s unexpected.” One of the strangest logic was that “It’s unexpected, therefore no one takes responsibility. It is a natural disaster.” I can hardly understand that a nuclear reactor explosion is a natural disaster. I personally thought, I don’t want to die with the reason of “unexpected.” The Fukushima disaster opened my eyes, it said “Hey you, wake up!” But I don’t know what I can do about this. Maybe it is better if I keep sleeping, ignoring the Fukushima disaster. However, I also know that if everyone keeps sleeping, the next disaster is unavoidable. Whether I am ignoring the problem or not, Japan has around 60 nuclear reactors. That fact always remains. I asked myself, “Why did this happen to us?” A part of me still wants to go back to be a person who doesn’t think about this problem. On the other hand, I cannot stop thinking what Fukushima really means: What does it mean to use an energy source that forces us to lose a part of our country? What does it mean to use air conditioning and to access the internet powered by nuclear reactors which endanger the life of people, especially children’s lives.

Then, what can I do about it? Maybe I can do nothing. I still would like to ignore the problem since thinking is hard. However, I also said to myself, “If I cannot change anything, does it really matter? It isn’t hard to try to think about this problem. If I can achieve something, that’s pure luck, but if not, so what?” So I started researching the energy problem. It’s fine even if I can only understand just a part of it. I just don’t want to hear the excuse again, “Sorry, that is a unexpected natural disaster, we can do nothing for you.”

In part two of this article, I would like to look into my next questions, “How much does the nuclear decommissioning cost, and how long does it take?”, “What should we do with the nuclear waste?”