We talked about what is the nuclear waste, how it is generated and what kind of process we need to do in order to put it in a final disposal storage. Since we still do not have a practical (cost effective) nuclide conversion technology, the most practical method to render nuclear waste innocuous is its long term management. In the next section, we will review the property of nuclear waste. That will bring up what kind of problems we have with the final disposal of waste.

A chart of radioactive decay over time

When used fuel is taken away from a reactor it is highly radioactive. Thus we need to store it in somewhere and wait for the radioactivity to become lower. At the meeting we saw a radioactivity attenuation chart, which shows that it takes a long time.

Figure 3 shows the radioactivity attenuation of used fuel over time. You can find this chart at the web site of Research organization for Information Science & Technology (RIST) [1], that refers to the web site of Japan nuclear cycle development institute asthe source of the data. 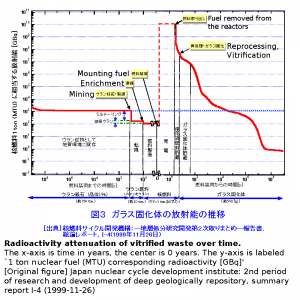 How to read Figure 3:

According to the criterion of the Japanese government, though it depends on nuclide and food, we should avoid eating food with an activity of more than 100 Bq per kg. Compare to this number, radioactivity of the used fuel is enormous. It seems beyond my imagination.

There is the 0 on the x-axis at the center of the graph. This is the time when the fuel is first used. To make Uranium useful as fuel, it is enriched, i.e., its radioactivity is increased. As we go to the right, time passes. The axis ticks increases 100 years, 102 years, and so on.

The graph shows a horizontal blue dotted line. This line shows the radioactivity when Uranium ore is in a mine. The cross point of the red line and the blue line is between 104 and 105 years. Therefore, it takes about 10000 to 100000 years until the radioactivity of used fuel reaches the level of naturally occurring Uranium ore.

By the way, it is unfair to compare the 100 Bq/kg for food and 10 quintillion Bq/t for used fuel. Note that the units are different: Bq/kg and Bq/t. This means that radioactivity of 1 Bq/kg is 1000 times higher than 1 Bq/t. Therefore a fair comparison is between 100 Bq/kg for food and 10 quadrillion Bq/kg for used nuclear waste. We sometimes miss the unit difference. Sometimes we could find these units are not consistent in some news articles. The different units are not technically a mistake, but it is still misleading. When we use the same unit here, 100 and 10 quadrillion are quite different.

These large numbers are hard to see. We do not know what 10 quintillion or 10 quadrillion are. Scientist usually use the scientific notation to write these numbers. The scientific notation uses exponent. In other words, this is how many zeros are in the number. 100 has two zeros after one, in exponent writing this is 102. 1 quadrillion is 10,000,000,000,000,000. This has 16 zeros after 1, it is 1016. Many advertisements use large numbers since they have a high impact when heard. For example, a sport drink in Japan claimed that was an 1000 mg effective medicine dosage, but this has the same effect as 1g of medicine dosage. Still, 1000 has makes an impression on us, so it is a good advertisement strategy. This is fine for an advertisement, however, I recommend to be careful about units an article about radioactive contamination for the news.

How long shall we keep the used nuclear fuel?

If you search about radioactivity attenuation of nuclear waste (Figure 3) you find many similar figures on the Web. I later realized that this figure only shows it takes more than 10 thousand years for the used fuel radioactivity to decay to the same level of an Uranium mine. I found nothing about the safety of the level of an Uranium mine. My first impression was, “wow, at least 10 thousands years, that’s a long time!” But I never asked the question: “is it safe after 10 thousands years?”

The blue line in the figure indicates 1000GBq/t, which means 1GBq/t (one billion Bq/t). 1 GBq/t is quite a large radioactivity value. Though one thing is not clear here that in the explanation, “1 ton nuclear fuel (MTU) corresponding radioactivity [GBq]”, I assume that this unit means GBq/t. If I convert it to Bq/kg, this is 1000 MBq/kg, that is 1GBq/kg, and this is 10 billion Bq/kg. As we mentioned before, the recommendation of safety for food is 100 Bq/kg according to Japanese government, and a value that is 10 million times larger does not safe to me.

I do not know what is blue line in Figure 3 means. Can I safely get near to some radioactive substances if the level is lower than this blue line? As a citizen, I am more interested in safety, so I try to connect this figure to safety, but this is not even labelled as radioactive dosage. I think this figure only shows the relationship between time and radioactivity attenuation, but that is not related to safety.